Eva Longoria has revealed she has learnt sign language so she can communicate with her deaf fans. 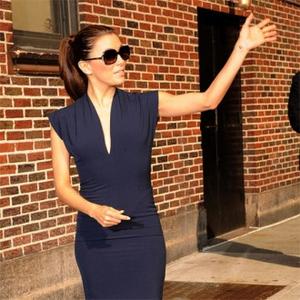 The 'Desperate Housewives' star - who recently launched her own cook book Eva's Kitchen - decided to learn how to sign so she can communicate with her deaf fans.

Speaking at the 9th Annual GLAD Benefit Extravaganza - which was held in support of deaf individuals and those hard of hearing - in West Hollywood, California, at the weekend, she said: "I've had a lot of deaf people who have bought my book and I've been able to talk to them about what my favourite recipe is and what to cook."

Eva - who attended the event to support her friend, celebrity hairstylist Ken Paves - is prepared commit herself to various charities to help people with disabilities and from deprived social groups because of her experiences within her own family.

The 36-year-old actress - whose sister Elizabeth has Down's Syndrome and whose parents are Tejano, meaning Texans of Mexican descent - added to website Hollyscoop: "I always think it's important to bring awareness to minority or a minority population and whether you're Latino or black or a woman or deaf, it still falls into that category of needing support from people who aren't normally around this type of population.

"I come from a diverse background of people with Special Needs, because of my sister, so I'm happy to bring my voice to this cause."