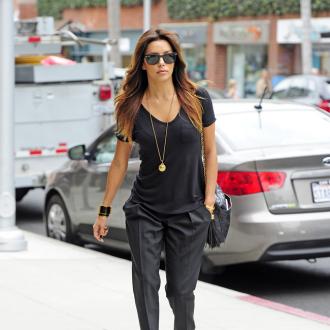 The 'Desperate Housewives' actress went public with her new man over the weekend, after keeping her romance with the Mexican businessman under wraps for the past few weeks.

A source told People magazine: ''He's been sweeping her off her feet and courting her like a proper gentleman.''

Jose - who is the president of Televisa, the largest media company in Latin America - was first spotted at New York's Serafina restaurant with Eva in October.

It appears Jose was mistaken for her former boyfriend Eduardo Cruz at the time, since the lunch date - which saw them ''holding hands and kissing'' at the table - fuelled rumours the actress had rekindled her romance with her old flame, who originally called things off in June 2012.

Both Eva and Eduardo were quick to deny they were together on their respective Twitter accounts.

Earlier this month, it was reported Eva had started seeing ''a wealthy, successful businessman from Mexico'', with a source saying, ''She's very happy, and he's crazy about her.''

The stunning actress had been single since ending her relationship with reality TV star Ernesto Arguello, who she met while producing dating show 'Ready to Love', in August.