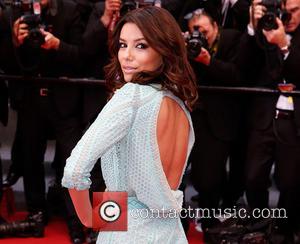 Eva Longoria suffered an embarrassing wardrobe malfunction at the Cannes Film Festival in France on Saturday (18May13) when she accidentally flashed fans and photographers as she walked the red carpet.

The former Desperate Housewives actress gave onlookers an eyeful as she lifted up her glamorous green gown to avoid rain puddles while making her way into the premiere of Jimmy P. (Psychotherapy of a Plains Indian) at the star-studded movie event.

In photos of the incident, Longoria's crotch area is visible but it is unclear whether she was wearing flesh-coloured underwear beneath her dress.

Longoria appeared to be completely unaware of her fashion faux pas and proceeded to pose for photos alongside her fellow L'Oreal brand ambassadors including Doutzen Kroes, Cheryl Cole and Jane Fonda.