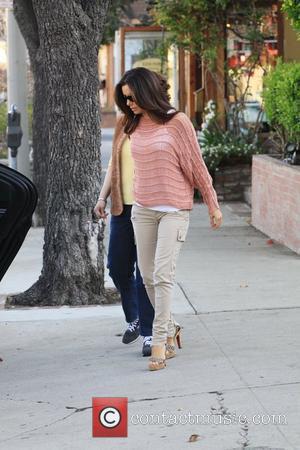 Picture: Eva Longoria returns to her car after visiting a nearby hair salon Los Angeles, California - 03.03.12

Following her messy break-up from basketball star Tony Parker, Eva Longoria is turning matchmaker and developing her own dating show. With plenty of spare-time following the axing of Desperate Housewives, Longoria has come up with a prime-time dating show for single women around the country, tentatively titled 'All About Love'.
A source close to the show told US Weekly magazine, "It's designed to help real women get back into the dating pool.They've chosen single women and single mothers - women who have been through a series of heartaches and battles in life and have all but given up on finding one true love". Though dating shows are nothing new, Longoria's program is likely to focus on the contestant's back stories and their search for the "right person". The actress has reportedly created the concept herself and is looking to enlist the expertise of celebrity matchmakers Steve Ward from VH1's Tough Love and Amber Kelleher, who heads the Elite Dating Company.
Eva is certainly keeping busy following her divorce from Parker - she is also due to release her new fragrance later this year. Speaking to Health magazine in January, the actress said, "Even after my divorce, everybody was like, 'Wow, you bounced back so quick.' I was like, 'I am not letting this take over. Something great is around the corner -- I can't wait to see what's going to happen".