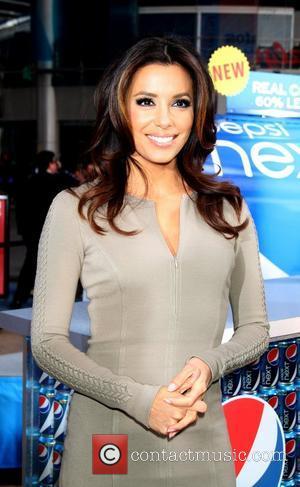 Picture: Eva Longoria promotes the Pepsi Next Drink It To Believe It event in Times Square New York City, USA _ 06.04.12

Eva Longoria had a tearful final day on the set of Desperate Housewives, weeping in the arms of her co-star MARCIA CROSS as the show came to an end after eight years.
The actress, who plays Gabrielle Solis in the comedy drama, welled up with emotion when shooting her final scenes on Thursday (26Apr12) and she shared her sadness with fans on Twitter.com.
Longoria posted a series of photos from the set of the show, including shots of her crying with Cross and hugging fellow Desperate Housewives star Felicity Huffman, and an image of her now-abandoned trailer.
In a series of tweets, she writes, "That's a wrap! End of an era!... Bye bye trailer! All cleared out and empty! Ready for another actor to move in! Me and the beautiful Marcia Cross! Crying our eyes out! Me and Felicity Huffman holding each other so tight! She kept me standing for the last 8 years! I love u (sic) Flicka!"
The show, launched in 2004, will end in the U.S. next month (May12).