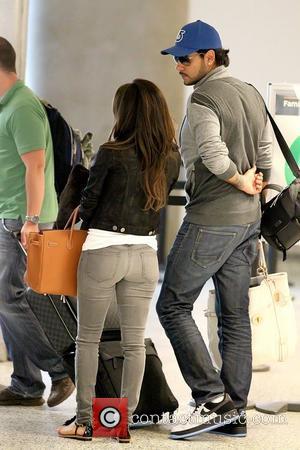 Picture: Eva Longoria and Eduardo Cruz arrive at LAX to board an international flight for a romantic vacation. The couple get intimate with each other...

Celebrities like Eva Longoria, Josh Duhamel and Ashton Kutcher had their eyes on the stars on Friday morning (08Jul11) as they watched the final NASA space launch.
America wrapped up its 30-year space programme with the take-off of shuttle Atlantis from the Kennedy Space Center in Florida - and the stars were watching, and tweeting.
Longoria retweeted the CNN post, "Atlantis blasts off from Kennedy Space Center. It is the final mission of America's 30-year space shuttle program," while Kutcher wrote, "Good luck to the space people, and shuttle lovers! It's a big day for rockets!"
Meanwhile, counting down to lift-off, Transformers star Duhamel added, "Who's watching the last Nasa space shuttle launch? T-minus 30 seconds! God Bless."
And singer Jimmy Buffett reportedly watched the launch from Nasa headquarters.
The shuttle is carrying supplies and spare parts to the International Space Station.
There have been 135 flights into space since the shuttle programme was launched in 1981.