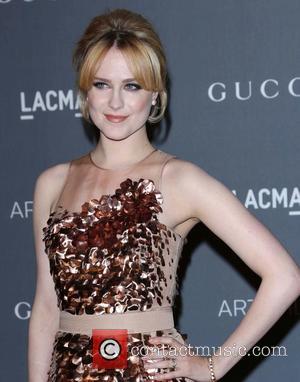 Evan Rachel Wood, 25, has tied the knot with actor Jamie Bell, 26, best known for his turn in Billy Elliot. A representative for Wood confirmed the news to People magazine on Tuesday (October 30, 2012).

"The bride wore a custom dress by Carolina Herrera," the rep says in a statement. "It was a small ceremony with close family and friends." The pair have been rumored to be engaged since January, though never made public their intention to marry. What we do know is that they first began dating in 2005, after co-starring in Green Day's Wake Me Up When September Ends music video, though Rachel Wood soon began a relationship with the rocker Marilyn Manson. In a Twitter post on Wednesday, The Wrestler actress said "Words cannot describe the happiness I am feeling. Overwhelming," before following up with, "Song of the day "(today i met) the boy i'm gonna marry" #darlenelove." British actor Max Minghella - a close friend of Bell - posted a message that read, "Yesterday I got to see my best friend exchange vows with the love of his life. Still coming down from high," which Rachel Wood subsequently re-tweeted. Bell is yet to tweet about the nuptials, though handily told followers a couple of weeks back, "My girl wears Batman socks. Ten points!"

He is currently shooting Lars Van Trier's hugely controversial drama Nymphomaniac, while Rachel Wood is about to begin work on the romance It Is What It Is, with Sigourney Weaver.