Evangeline Lilly Confirmed She's Expecting A Second Child Hours After Showing Off A Fuller Figure At The Ant-man Premiere In Los Angeles By Appearing On U.s. Late-night Show Conan And Joking About Her Weight Gain. 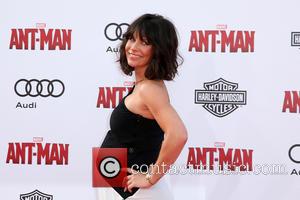 The actress hit the stage in a flowing, plunging yellow gown that showed off her baby belly and made the big reveal after host Conan O'Brien told his studio audience and viewers she was pregnant.

The former Lost star joked, "Come on, a girl has a couple of extra sandwiches and then what?"

Lilly then revealed she's "about seven months" along and she and her boyfriend Norman Kali have no idea whether to expect a girl or boy.

She said, "We don't know this time; we didn't know last time. Last time I had to find out that I had had a son because I'd given birth and I was holding my beautiful baby in my arms, looking at the beautiful, perfect face... and I heard my partner, Norman, say, 'Holy cow, look at the size of the balls on that kid!'"

The actress gave birth to little Kahekili in May, 2011 at home in Hawaii in a thunder storm, but she isn't planning to go through the experience again.

She explained, "There was an island-wide power outage at the moment of his birth, so it was dark and there was no lights and it was a bit crazy. It was at the end of 30 hours of labour and eight hours of pushing...

"I was in a fully meditative state throughout the entire labour, probably actually too much of a meditative state; sometimes I wonder if maybe I had come back to real life and participated if it (labour) wouldn't have been a bit shorter."