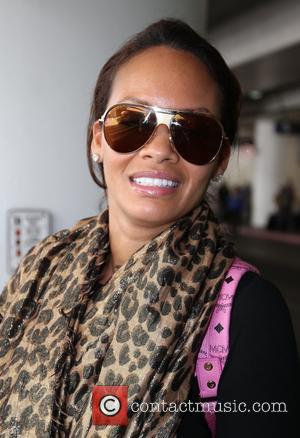 Lozada made the announcement via her Instagram account by posting a photo of her hand with the huge ring on, the caption simply read "YES!"

"I'm overjoyed and in complete and utter shock!" Lozada, 37, tells People. "What a different year and a half it has been - I'm truly happy!"

Her rep also told People "wasn't expecting a proposal at all," and when Crawford knelt down to ask the big question "it took Evelyn by surprise."

Back in November of this year (2013) Lozada announced she was pregnant but didn't reveal who the baby's father was.

"I am so excited to announce a wonderful blessing - I'm pregnant!" she said at the time.

"I'm excited about being a mommy all over again," adds Lozada, who has a daughter Shaniece (20) from a previous relationship. "This is something I've been wanting for years and I can't believe it's finally happening."

The reality star was previously engaged to former NBA player Antoine Walker, since then she had a two month-long marriage to NFL player Chad "Ochocinco" Johnson, which ended following a domestic-violence dispute.