Every Time I Die Quick Links

A fan got spit in her eye thanks to Jordan Buckley, but it indirectly saved her from cancer.

It's not unusual for music fans with front row seats at their favourite band to end up getting showered in sweat, spit and whatever else the artist decides is good for audience interaction. But for one Every Time I Die fan, getting spit in her eye actually saved her life.

What a year this has been - 2016 has been the year that rock music has been yearning for since the turn of the decade.

Just from bands that didn't make the final ten, we've seen stunning new British bands break through in the likes of Milk Teeth and Zoax, while the Dillinger Escape Plan signed off with a record that eclipses even their own impeccable standards.

Never before has a list changed shape and order so often, and had so many records conspicuous for their absence. These ones, however, have made the cut...

2016 has been an eventful year for sure

A number of historic moments happened with Brexit, the US election and the absurd amount of tragic deaths of some of the most significant figures in the arts. However, what 2016 will also one day be looked back on is an incredible year for music.

This list wasn't easy to compile, and is just a glance at the amount of excellent music 2016 has had to offer. There's been fascinating hip-hop, highly oddball experimental music, refreshing pop music, plenty of punishing hardcore/metal/noise and inspiring passion from DIY scenes. There's also been a great number of emerging artists, displaying much potential with singles, EP's and captivating performances, where hopefully we'll see them put out records soon which will make 2017 a rich year for music. Shout outs in particular to Iglooghost, Yonaka, Mssingno, Miles Mosley and Kai Whiston, be sure to keep an eye on them.

Here we are though, 2016's 10 finest records in my opinion, that display endless possibilities in this thing we call music.

By Max Cussons in Music Reviews on 11 October 2016

Hardcore n roll kings Every Time I Die have been one of the most constantly thrilling and fun bands in heavy music since the start of the century. Across milestones such as 2003's 'Hot Damn!', 2007's 'The Big Dirty' and 2012's 'Ex Lives', Every Time I Die have crafted a wholly unique sound that balances brutal metallic hardcore with party-atmosphere rock n roll. Not only have they never put out a bad record, but they've never put a record which is less than excellent, and newest release 'Low Teens' continues the trend.

'Fear and Trembling' kicks this thing off with crushing guitar stabs tied with southern licks that make it sound like the soundtrack to an R-rated cowboy shootout, and Keith Buckley's menacing shrieks truly makes the song apocalyptic.

'Glitches' is more cutthroat with all-over-the-place, but groove heavy riffs. This is classic Every Time I Die with the perfect middle ground between anarchy and party spirit. 'C++ (Love Will Get You Killed)'on the other hand is more on Every Time I Die's breezy rock n roll side, with little of this song trying to bludgeon your ears, but rather going for a motorcycle ride with riffs cool enough to be ice in your whiskey as well as Buckley taking on a smooth croon. That being said there's still room for some muscle to get people flailing into each other at shows.

Age is something that doesn't seem to have affected Every Time I Die as the band have spent more than a decade unleashing records that combine hellish technical hardcore with catchy southern rock. On some albums, the rock outweighs the hardcore ('The Big Dirty', 'New Junk Aesthetic') and some are more hardcore than rock ('Hot Damn!', 'Ex Lives'). 2012's 'Ex Lives' saw the band on excellent form being their most aggressive release to date, while still maintaining plenty of hooks and grooves to add a thrill to the brutality. 'From Parts Unknown' sees the band go even further into abrasive territory, but sacrificing some of their accessibility along the way. 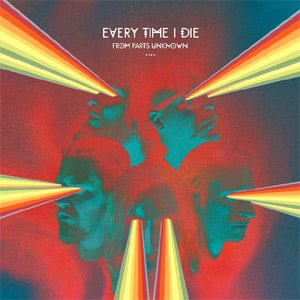 'The Great Secret' introduces this album perfectly thanks to in-your-face technical fretwork and jilted riffs that makes you feel as if you're being slapped with bricks, while vocalist Keith Buckley barks madman lines like 'Blow your fu**ing brains out'. The song reflects the essence of much of the album; here's a band pushing themselves to be as punishing with their sound as they can be, leaving behind catchy choruses and the like in order to do so. 'Decaying With The Boys' injects some of the southern rock melody that can be expected with Every Time I Die as Buckley's vocals display sassy and cool characteristics and the guitars deliver some fun licks, which are still speedy and hard.

'Moor' throws a massive curveball as the first half of the song is just vocals and pianos. It's a little reminiscent of Queen, but more melancholy as Buckley murmurs lines like, 'I'll skin the man alive and sell the meat'. The second half of the song explodes into screaming and riffs, beating the rhythm into your head; certainly one of the highlights of the album. 'Thirst' has the strongest hook due to the low driving bass and pounding drums that accompanies, 'They don't love you, like I do, but I don't know you like them. They don't love you like I do, they love you better, I KNOW YOU BEST'. The lyrics sound ludicrous while still providing a relatable mind-set, showing there's bit of a nutter in all of us.

1
Every Time I Die

Every Time I Die Quick Links