Review of The Dance Album by Faithless

Although this record has been out for a couple of months it has been made all the more relevant due to the band's slot on the Pyramid Stage, then at T in the Park and later, their iTunes Festival appearance at the Roundhouse. There has been a suggestion that this period is something of a renaissance for the radio-friendly dance stalwarts. It isn't, rather it shouldn't be. 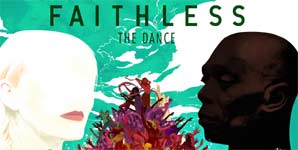 It is 5 years now since their Greatest Hits release and that Farewell Tour and two studio albums later the Faithless train is showing no signs of slowing down. More is the pity. Debut 'Reverence' and follow up 'Sunday 8pm' were albums of wonderfully constructed house music. 'Salva Mea,' 'Insomnia,' 'Bring My Family Back,' and 'God is a DJ' became instant classics and later 'We Come 1' would become their biggest live track. Thousands of revellers raising an index finger in unison with Maxi has become a 'festival moment' in the intervening years. Unfortunately it was their peak.

'No Roots' came and went, as did the GH Tour, before the heavily-politicised 'To All New Arrivals' bombed when it debuted at number 30. This was a great band out of ideas and they should have gone their separate ways. They haven't, and now we have 'The Dance.' It's an album obsessed with the past and, in truth, even the band know it's not up to scratch. Made available only in Tesco stores in cd format, or to download through iTunes, Faithless must have struck two big, money-making contracts, or didn't want to pit 'The Dance against its rivals in the field.

There are two small highlights on 'The Dance', the inclusion of Temper Trap's Dougy Mandagi on 'Comin' Round' and the, albeit, expected appearance of Dido, an ever-present on every Faithless album. Despite Sister Bliss' best efforts, the eerie bleeps work well against Mandagi's falsetto warbling, his inclusion the only thing remotely contemporary. The trancey 'Feelin' Good' and atmospheric 'North Star' see Jazz's deep MC-ing juxtapose with Dido's echoed vocals. It's nothing new. Dido sounds as good as ever, but her inclusion has become as astounding as Kerry Katona's inability to overdose on frozen food. There's something in that.

The rest of the album is akin to passing out on the toilet and being sick in your pants. Opener 'Not Going Home' sounds like a school project, though 'Boy In Da Corner' this isn't. A hotchpotch of styles, sympathy must go to Maxi for being part of this. A truly great frontman, it becomes all too much when his vocals are vocodered. The dub of 'Crazy Bal'Heads' is to follow, and is as authentic as passing off a Spar-bought Lilt as a trip to the Caribbean. It's a token gesture in an album of many.

'Tweak Your Nipple', whilst somewhat unsettling in the main, uses a Fischerprice keyboard demo as a breakdown and is so far away from the Superclub sound it is aiming for it almost catches up on the loop back round. 'Sun To Me' takes a similar route, using a looped organ-like key change to create what can only be described as a desire to listen to less music.

'The Dance' is good for only one thing; clearing your house party when you want everyone to go home. Its limited release only appears to show that even the band think it's s**t, quite where the good reviews are coming from is a bit of a mystery.
(A generous)

Faithless Take New Remix Album To The Top Of The U.k. Charts

Faithless' Final Concert To Be Beamed Into European Cinemas