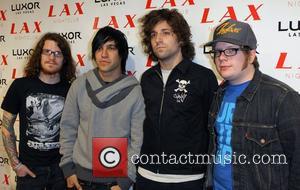 Fall Out Boy star Pete Wentz has stunned fans by revealing he was once so depressed he tried to kill himself. The rocker has spoken about his ordeal in an effort to encourage students suffering from mental illness to seek out professional help. Wentz admits he was paralysed by anxiety and depression at the beginning of his career and he felt so lost and alone he attempted suicide. Wentz has joined stars like Mary J. Blige and Smashing Pumpkins frontman Billy Corgan to front the Jed Foundation's Half Of Us campaign, which is aimed at cutting student suicide rates. The trio has each sat for video interviews, in which they detail their darkest hours. The videos appear on MTV's college channel MTVU. During his revealing interview, Wentz says, "The darkest moment was when we had just finished recording out major label record and two days later we were going to go to Europe and I felt completely lost and out of control. "At that point, I'd seen some doctors and they were Hollywood doctors so they gave me a cocktail (of prescription drugs) but I was kind of the drugstore cowboy, so I took the cocktail the way I wanted to take it. "I got in my car. I remember I was listening to Jeff Buckley doing Leonard Cohen's (song) Hallelujah and sat there and took a bunch of (prescription drug) Adavan in a Best Buy (store) parking lot. "And I called up my manager because I was, at that point, completely out of my head with Adavan. And I was talking to him and I was slurring my words, so he called my mom and my mom called me and she came and got me and we went to the hospital. "I came home and we realised that we needed to do more than just keep (my) head above water. It's not really about keeping your head above water, it's about feeling all right and feeling safe in your own skin. It's not about keeping your head above water and barely keep going."