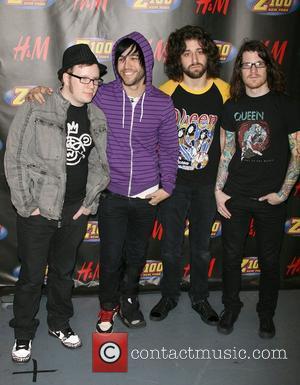 Fall Out Boy star Pete Wentz pokes fun at his penis-baring internet scandal in the group's new video THIS AIN'T A SCENE, IT'S AN ARMS RACE by recreating the moment he let it all hang out. The rocker almost quit the group and turned his back on fame after an embarrassing photograph of him semi-naked, holding his erect penis was launched into cyberspace earlier this year (06). The bassist emailed the candid mobile phone photo to a girlfriend and the saucy shot was intercepted by a third party and put on the internet. But now Wentz, who is dating Ashlee Simpson, can see the funny side of the incident - and he's having a little fun with the scandal in the new promo. He even had director ALAN FERGUSON recreate the bathroom at his parents' house - where he first flashed his manhood. Wentz says, "It's so bizarre. Part of me wanted to call my mom up and be like, 'Our bathroom wall's in this...' More people have seen that picture than have bought our record, which is a very bizarre statistic to think about." In the scene, a twisted photographer persuades Wentz to unzip his jeans and show him his manhood. The video then cuts to shocked fans who download the photo of the bassist baring all.