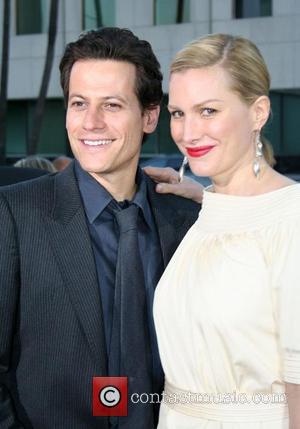 Fantastic Four star Ioan Gruffudd has opened up about his attempts to start a family with wife Alice Evans, revealing the actress underwent an in-vitro fertilisation (Ivf) procedure after failing to fall pregnant naturally.
The couple wed in 2007 and welcomed little Ella two years later (09), but Gruffudd admits they endured a tough time and needed specialist treatment.
He tells Britain's Weekend magazine, "We'd wanted a baby for a while and after it didn't happen for us naturally we said, 'Let's take what science has to offer.' Luckily for us, it worked the first time so it wasn't a long, hard struggle.
"But that's just the beginning of the journey, then there's the whole other worry of, 'Are we going to get to 12 weeks?'. It was a long, anxious process and then Alice was on bed rest for the last eight weeks because of high blood pressure, which is quite serious."
And the labour was just as stressful for Evans.
Gruffudd adds, "She then went through a 48-hour labour. We went in on the Friday morning for an induction because of the high blood pressure and it got to the point where they were saying, 'We've got to move this along.' We tried to do it naturally but by the end, Alice was begging, "Oh, give me the b**ody drugs!". Ella finally arrived on Sunday morning at 3am and it was an incredible experience."