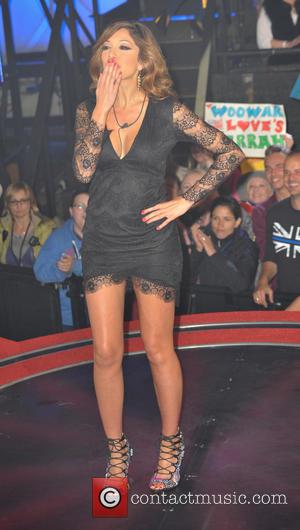 The Teen Mom star was photographed arriving at St Thomas's Hospital in London in a wheelchair on Thursday (24Sep15), almost two days after she clashed with another guest on Celebrity Big Brother's Bit On The Side on Tuesday night (22Sep15).

Abraham, who faces potential legal action over the incident, claims she was assaulted twice following an on-air spat, during which a champagne glass was thrown, injuring British actress Vicki Michelle.

The drama prompted Abraham to scrap a scheduled return appearance on the show on Thursday (24Sep15), fearing she would be putting herself in "a potentially hostile situation".

The defiant reality TV star tweeted, "Congrats to the winner tonight Thank you all for the support and I will reveal my truth soon!"

Michelle is planning to take legal action against Farrah after she suffered whiplash and concussion following the brawl, which she was not directly involved in.

In a statement, her agent confirmed his client "will be pressing charges against Farrah Abraham, who struck the back of her head with great force with a glass during the recording of CBBBOTS this week."

And a spokesperson from Hertfordshire Police has told MailOnline, "Officers are continuing to make inquiries with relevant parties following the incident which occurred at Elstree Studios on the evening on September 22."

A representative for Abraham tells the same website the Teen Mom star was the one who called the police following the on-set spat, adding she has been "liaising with the police and her lawyer in regards to the night's events".

Regarding Abraham's assault claims, her spokesperson says, "We can confirm that Farrah was assaulted twice... during BBBOTS and was seen by a medic, having suffered injuries as a result of one of the assaults. The matter has now been passed on to Farrah’s lawyer to handle."

The drama unfolded after Abraham began arguing with another guest, Aisleyne Horgan-Wallace.

Viewers didn't actually see the fight as Channel 5 bosses cut to a graphic as the violence erupted. Host Rylan Clark then explained the panel would not be returning due to an "incident".

On Wednesday (23Sep15), British reality TV star Horgan-Wallace claimed she attempted to throw champagne over Farrah, and was stunned when the Teen Mom star allegedly threw two flutes at her.

She told The Mirror newspaper, "She (Farrah) threw the glass at me. It smashed all over the floor and the desk. Because it didn't get me she picked up another glass, threw it and it smashed."

Following the fight, Abraham was photographed being escorted from the Elstree studios by security guards.

The two finalists, who became good friends on the month-long show, were neck and neck throughout voting, with Hill winning by just two per cent of viewers' picks.