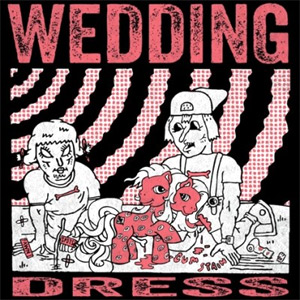 The first four tracks by Fawn Spots are all messy affairs. Each part of each song seems to be trying to distance itself from the other components. The manic guitar and flustered drum arrangements are at odds with the anthemic, Americanised, stadium rock vocal delivery on all four tracks. The York trio of Jonathan, Oliver and Sean seem intent on creating their own genre of tri-polar garage thrash. While the vocals are mixed in at 33rpm, the rest is played at 78rpm. A forlorn Foo Fighters fantasy sits atop an uninspiring and hackneyed pastiche of some of SLF bedroom demo. If you're expecting a dynamic, explosive or fresh take on punk or garage rock this isn't it. Without exception, each track starts with promising intent, unfortunately this all too soon collapses into a confused cacophony. The Stooges ('I Wanna Be Your Dog') influenced 'National Anthem' is Fawn Spots best track here and taken in isolation is tolerable.

Their six track sequence is headed up by 'Ghost Love', a song infused with 60's psychedelic surf pop. The vocal styling takes a leaf out of the Mark E Smith condenser microphone song book and is very effectively hooked up to a stream of infectious fuzzy guitar riffs set to an alienated and detached percussive arrangement. More West Coast inflections are heard from the Oakland band on 'Sippy Cup' before Dylan meets The Jesus And Mary Chain on the blistering 'Bloody Finger'. 'Can't Take It' slows the pace with a near 'Teenage Kicks' intro before the more frenetic, closeted Cramps, 'Sit And Twist' and the gloriously scuzzy and filthy feel of 'Rollin' Wrong' drawing the album to a close.