Fearne Cotton has got engaged to her boyfriend Jesse Wood, the father of her son Rex Rayne. 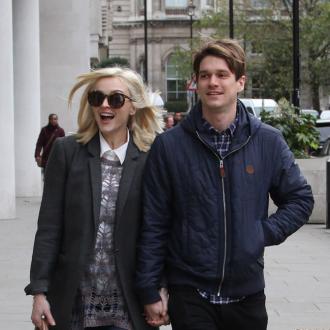 Fearne Cotton is engaged to her boyfriend Jesse Wood.

The BBC Radio 1 presenter, who has been dating the 37-year-old guitarist since 2011, has taken to her Twitter account to reveal he proposed to her on Sunday (08.12.13).

The 32-year-old star - who gave birth to the couple's son Rex Rayne eight months ago - wrote: ''I'm over the moon to tell you that on Sunday Jesse proposed and I happened to say Yes. (sic)''

Jesse's half-sister Leah Wood was quick to congratulate Fearne, tweeting: ''@Fearnecotton well we have a COTTONWOOD in the family!! Welcome we are all thrilled!! (sic)''

The wedding means the blonde star will become the daughter-in-law of Rolling Stones legend Ronnie Wood, who fathered Jesse with his late first wife Krissy Findlay.

Fearne found love again after calling off her brief engagement to skateboarder Jesse Jenkins in the summer of 2011, which she confessed was her ''rock bottom moment.''

Her new fiance has two children Arthur, 11, and Lola, seven, with ex-wife Tilly Boone, whom he was married to for eight years from 2003.

Fearne previously said: ''I'd love to get married and I'm sure Jesse would too, but we don't have any plans yet.

''We're so hectic with a baby and two other kids, and we're both working. I think it's important to feel like a family unit though.''