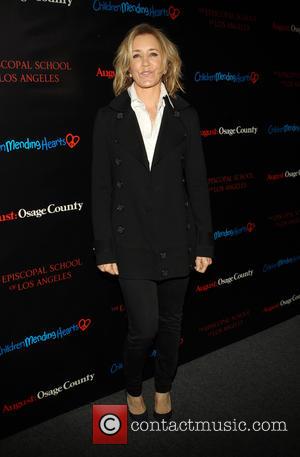 Actors William H. Macy and Felicity Huffman received a holiday fright while on vacation in Aspen, Colorado after a bear almost broke into their home.

The Hollywood couple enjoyed a festive break in the popular celebrity skiing location, but the trip was marred by a pair of scary encounters with local black bears.

MACy reveals one of the animals managed to sneak into the stars' lodge, saying, "There are bears (in Aspen), you never see them, except I saw one! I came into my house and there was a bear eating a watermelon..."

MACy filmed the incident on his cell phone and showed off the video during an appearance on America's Late Night with Jimmy Fallon talk show on Wednesday (08Jan14), and he admitted he was a little too engrossed in catching the bear on film than he was about getting to safety.

Explaining the shaky footage, he said, "I freaked out... I realised I was doing a little too much camera work and not enough running! He finally drifted away... That bear wasn't normal."

But he wasn't the only one to come face-to-face with the wild animals - one bear smashed a window as it tried to gain access into their home.

MACy added, "When Felicity came in one night with the dogs, they were the canine equivalent of pale... This bear had destroyed the window! It broke the window and had almost gotten into the house."