Josh Duhamel says he "just clicks" with kids after wife Fergie announced she is pregnant with the couple's first child. 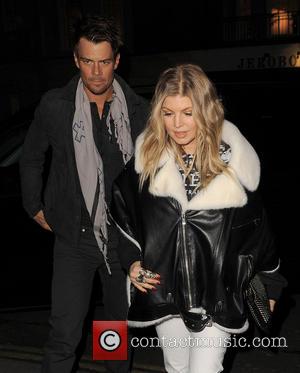 Fergie joined Josh Duhamel in London this week for the promotional campaign of his new movie Safe Haven, with Julianne Hough. Fergie, 37, recently announced she is pregnant with her first child and Josh opened up about impending fatherhood with omg! Yahoo, suggesting he "just clicks," with kids.

"It's very exciting," the 40-year-old said, "Seeing that ultrasound is unlike anything you've ever seen. Unless you've had one yourself. You're like, 'Wow, it's mine." Josh and Black Eyed Peas singer Fergie were photographed taking in the sights of the English capital, before chowing down on some pizza at popular chain restaurant Pizza Express. "I think that I've always had an affinity for kids," Duhamel suggested, "There's something about me and kids that just click. I don't know if it's because I am a kid, but it does prepare you whenever you're around them."

The actor has plenty of experience of playing fathers on-screen - he plays a dad in Safe Haven, and took on the family role for Life As We Know It in 2010. Despite this, Duhamel conceded he still has plenty to learn, "All that stuff is a learning experience for when it actually happens, but I don't think you're ever truly prepared until it's your own."

Fergie announced her baby news on February 18 on Twitter. She and Duhamel have been married since January 2009.