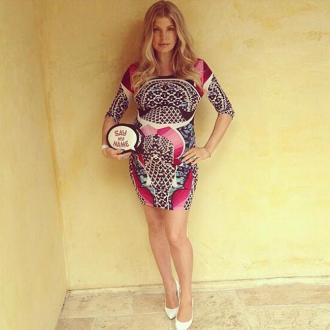 Fergie celebrated her ''gayby'' shower with guests including Kelly Osbourne and Adam Lambert on Sunday (28.07.13).

The pregnant 'Fergalicious' singer and her husband Josh Duhamel were joined by a host of celebrity pals at the SLS Hotel in Los Angeles, California, at a baby-themed bash thrown by a quartet of her close gay pals.

Glowing Fergie, who is expecting a baby boy with Josh, got the festivities started by telling guests: ''Woo! It's my baby boy's first party!''

The songstress also shared a picture of herself - in which she can be seen holding a speech bubble that reads 'Say my name' next to her baby bump - at the party on Twitter, and captioned it: ''It's gayby shower day! He's trying to talk!''

The drinks list included the special 'Ferg-arita', 'The Hot Momma', blended in Fergie's honour and the Black Eyed Peas star's own Ferguson-branded wine.

After toasting the expectant couple, revellers were invited to indulge in sweet treats, including a sumptuous four-tier cake adorned with blocks reading the word 'BABY' and candy, which was provided in gift bags to the children in attendance.

The joyous occasion was one to remember, according to one guest, who told E! News: ''Everyone was over-the-moon enjoying themselves and glowing all happy to be sharing in Fergie's big day.''

Fergie - who wed 'Transformers' hunk Josh, 40, in January 2009 - is expected to give birth to the couple's first child imminently.