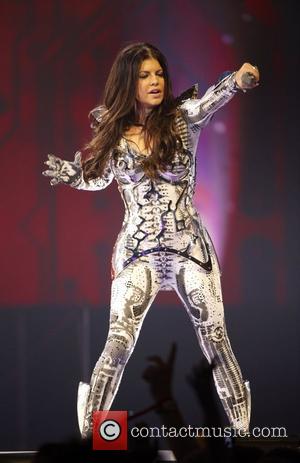 Pop singer Fergie has unveiled big plans for a tribute to her rock 'n' roll idol Slash next week (begs23Aug10), when the pair take the stage for a music festival in Los Angeles.
The former Guns N' Roses guitarist drafted in the My Humps hitmaker to contribute vocals for his track Beautiful Dangerous, which appears on his self-titled solo album.
And now the Black Eyed Peas singer is working with organisers on a planned salute to the rocker at the upcoming Sunset Strip Music Festival, where she's planning to join him onstage for a very special performance.
She tells Usmagazine.com, "I'm really excited to rock out with Slash. My inner rock chick will emerge that night."
Other acts scheduled to perform at the weekend festival include Common, The Smashing Pumpkins and Steel Panther.
Fergie and Slash's rock duet will take place on 28 August (10) at House of Blues.