Fergie Rumors: Is She Pregnant With Josh Duhamel's Baby? 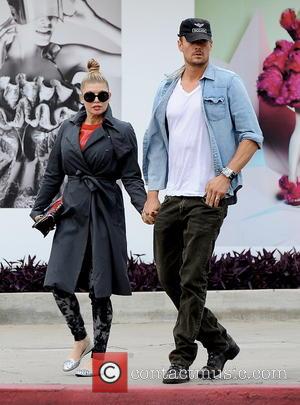 The Fergie rumors reached fever pitch over the weekend, after the Black Eyed Peas singer was snapped carrying what media outlets described as "a few extra pounds." Fergie - real name Stacy Ferguson - is approaching 40-years-old but it didn't stop the inevitable pregnancy rumors!

Anyway, those very rumors were shot down by Fergie's husband Josh Duhamel at the premiere of his new movie Safe Haven. Asked by E! News' Jason Kennedy whether he had any baby news to share with the masses, Josh answered with a pointed, "No." So there you have it, no baby Black Eyed Pea just yet. Jason told Duhamel, "You said it's gonna be your greatest career achievement, so we're waiting," to which the actor said having a baby with Fergie would be his "greatest life achievement."

The pregnancy rumors began swirling after Fergie was photographed in a black Gucci skiff dress, perhaps not the most flattering for her curvy physique though the speculation was a clearly a little premature. Ferguson and Duhamel married in a Catholic ceremony on January 10, 2009 after five years of dating. They first met when the singer and her group appeared on Josh's show Las Vegas. The Photograph That Sparked Those Pesky Fergie Rumors!