Fergie and her husband Josh Duhamel posed as the pop group the Village People for a Thanksgiving card which they shared with their fans on Twitter. 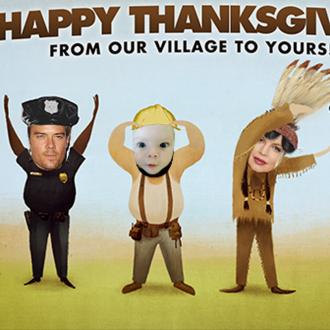 Fergie and her family posed as the Village People for a Thanksgiving card.

The 38-year-old singer celebrated the US holiday on Thursday (28.11.13) with her 41-year-old husband Josh Duhamel, their three-month-old son Axl Jack and their pet pooch Zoe, and they posted the special card on Twitter of the family recreating the pop group's famous 'Y.M.C.A.' dance moves.

Josh tweeted: ''Lots to be thankful for. Have a great 'my pants don't fit' day!! (sic)'', and attached an image which shows the family's faces imposed on cartoon figures of the band - whose members dressed as a variety of characters including a policeman, a Native American, a cowboy and a construction worker among others.

The Black Eyed Peas star - who re-tweeted the post - is the Native American chief, Josh is a police officer and Axl is a construction worker.