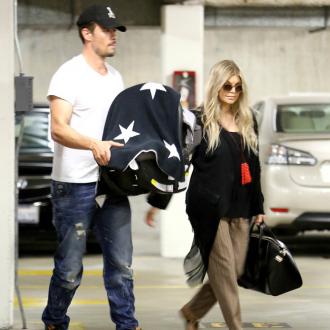 The 'Fergalicious' singer's son with Josh Duhamel, Axl - named after Guns 'N Roses singer Axl Rose - may only be six months old, but he's already following in his mother's footsteps.

She told Us Weekly Magazine: ''When I sing, he'll look at me and laugh and try to chime in.''

Josh added: ''He makes the funniest sounds. He gets very proud of himself.''

The family have temporarily relocated to Austin, Texas, and Josh, 41, is so pleased they can be together while he is filming new movie 'Lost in the Sun'.

He told Us Weekly magazine: ''She's here with me now. She's staying with me. We've got a house and the whole thing. We're one happy family in Austin, Texas.''

The couple, who usually live in Los Angeles, initially had a strict rule about not being apart for more than two weeks but Josh admits they don't need the rule any more because he wants to be with his family all the time.