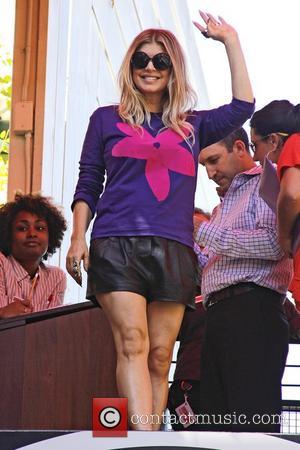 Pop star Fergie is urging fans to donate their old cell phones to soldiers fighting overseas so they can call their loved ones during the festive holiday.

The Black Eyed Peas star has teamed up with Cell Phone for Soldiers to create awareness of the charity and the I Gotta Feeling hitmaker reveals the organisation is close to her heart because her husband Josh Duhamel's aunt is a member of the armed forces.

She tells Us Weekly, "People can donate old cell phones or buy minutes at CellPhonesForSoldiers.com so troops can call home. It's such an amazing cause. Josh's Auntie Barbie is a soldier. She was in Afghanistan, and we're very proud of her. Plus, who doesn't have an old cell phone?"

To boost fundraising, the 37 year old, real name Stacy Ferguson, hosted a special bash in Los Angeles last week (06Dec12) to ensure members of the military won't have to dig deep to connect with their families at Christmas.

A number of stars turned out to lend their support, including her bandmate apl.de.ap, The Big Bang Theory actress Kaley Cuoco, and former One Tree Hills stars Joanna Krupa and Stephen Colletti, prompting Fergie to take to Twitter.com to thank them for opening up their wallets.