Fifth Harmony's Lauren Jauregui Is Urging Fans To Vote At Next Year's (16) U.s. Presidential Election, Or Risk Having To Live In A Country Run By Donald Trump. 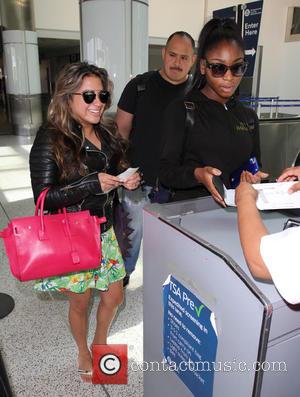 Trump's comments prompted a backlash from a number of leading Latinos, with celebrities including Eva Longoria, Ricky Martin, Pitbull and George Lopez all speaking out to chastise the outspoken Republican.

Jauregui, who is of Cuban descent, has now added her voice to those reprimanding Trump, insisting the tycoon is attracting the wrong kind of attention with his statements.

She tells Latina magazine, "I posted something the other day, reminding 18-year-olds to register to vote. Because the youth of America will decide, because we're the biggest demographic. We have the mass majority, and if young people don't get involved in the voting process, then Trump's going to win.

"He's catering to a portion of Americans - the racist ones. It's little things like that. If I can get 20 more girls to vote then that's 20 more votes against something that could be negative."

Jauregui's bandmate, Normani Hamilton, adds, "I've been doing my research, and I came across an article on Twitter quoting some of the things Donald Trump has said. His main issue that he speaks on is immigration. That really scares me - to think that he could be my future president, and have power of my life, my parents, my friends. For him to be president would be a step backward."