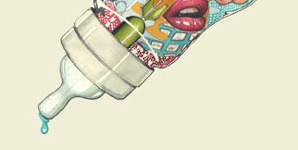 It's crunchy, fast and furious sounding punk-rock, but it also has a good mix of soft, more acoustic moments and passionately sung, heartfelt vocals that keeps the listener on their toes and interested. It's not exactly predictable, it's mostly catchy and on the whole it's good. But, it's been done before, quite a lot. It has elements that remind of Frank Turner or even The Clash, but in this case it works for Fighting Fiction quite well.

Although Fighting Fiction claim to have created a sort of "ska-tinted punk rock", with this full length album, there seems to be less of the ska and more of the punk rock. There's more tinges of ska on their older releases, but there aren't actually very many moments of it on this one, maybe one or two throughout the whole release, but not enough on the whole. It's more pure punk, with a very British twist to it, vocally - The West-Country accents make sure of that.

This doesn't make it any worse, but slightly disappointing when it's expected. It's still an enjoyable listen, it deals with some big issues and does it in an eloquent, musical and well-written way. It's very well done.

But, one of the biggest issues with this album is that, again, it's all music that's been done before. There's nothing particularly special about it, it doesn't stand out from what could be described as a saturated scene. This doesn't make it any less good, in fact, what is the point in changing anything if it works? It just means that some might be impatient with it, claiming that they've "heard it all before" and dismissing it without giving it a chance to impress.

Overall, then, a good, old fashioned ode to British-born punk rock. Nothing distinctly special about it, but nothing particularly bad about it either. It's well written, performed and presented and it sounds very good, but it just needs that little extra spark to make it stand out from the rest, to make it more distinct and individual. An average 5/10.