The show hits Netflix this Spring.

Marvel is set to continue its major Netflix takeover with the premiere of yet another eagerly anticipated superhero show entitled 'Marvel's Iron Fist'. Created by Scott Buck, it is based on the comic book character originally created in 1974 by Roy Thomas and Gil Kane. The new trailer for the show was released yesterday (February 7th 2017) and sees protagonist Danny Rand (played by Finn Jones) kick some serious ass at the headquarters of his family's company Rand Enterprises. He's back after many years of being presumed dead, while actually he is the sole survivor of a plane crash that killed his mother and father.

In thirteen hour-long episodes, we learn how Danny Rand ended up being raised in the mountains by martial arts experts and learned to summon the power of the Iron Fist. Now that destiny has caught up with him, he's back in New York City apparently determined to reconnect with a company that is rightfully his, though few people are welcome to see him. He knows that there are some criminal people working within the organisation and he wants to smoke them out before his family's entire legacy goes up in flames.

'Marvel's Iron Fist' follows a string of other Marvel based original Netflix series, including 'Jessica Jones', 'Daredevil' and 'Luke Cage'. A spin-off of the series is already underway, entitled 'The Defenders', in which Finn Jones will reprise his role. 'Marvel's The Punisher' is yet another show that is due to air later this year. 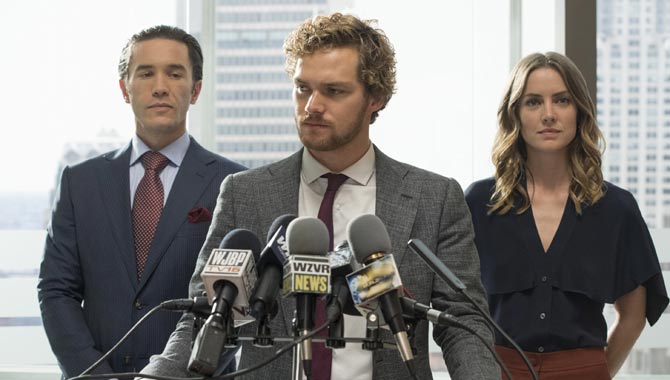