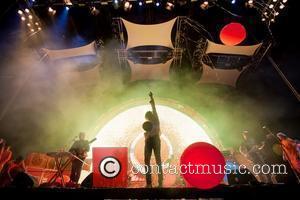 The Flaming Lips are aiming to break the world record for amount of concerts performed within 24 hours, the psychedelic band hoping to play gigs in eight different cities within the period and thus beating Jay Z's current Guinness World Record topping effort. June 27th will be the date of the groups gargantuan attempt and MTV have revealed that they'll be joined in their attempt by support acts including Grace Potter and the Nocturnals, Gary Clark Jr, Hunter Hayes, Givers, New Fumes, Neon Indian and Grimes.
Speaking about the event, the ever charismatic Wayne Coyle, front man of the 'Lips, said "I don't remember if I was asked or if I volunteered. ... But I've accepted the job of not driving but commandeering the Magical Mystery Merry Prankster bus." Continuing, he added "I've accepted the attempt at breaking the world record of performing eight shows in 24 hours. And I've explained to the music freaks at Mtv, VH1 and Cmt that I am not a host. ... But I always liked the way Jerry Lewis would get all sweaty toward the end of his yearly telethon. To play and sing Flaming Lips songs at eight in the morning, well ... I'm open to new experiences."
The whole attempt is going to be captured on video with live streaming of the band even as they travel between gigs taking place. More supports are to be announced soon.