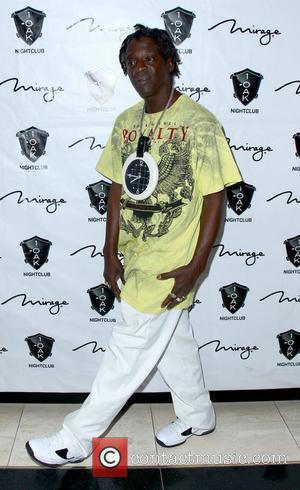 Flavor Flav made a bit of a fool of himself at the iHeartRadio Festival over the weekend. The Public Enemy member (he’s the one with the over-sized clocks) was filmed meeting Gwen Stefani backstage at the festival and he was clearly over the moon that he managed to get his picture taken with her. The only problem is that it wasn’t actually the No Doubt singer that he was posing with. It was Miley Cyrus. Yes, that’s right Mr. Flav managed to confuse the 42 year old No Doubt singer with the 19 year-old Hannah Montana star. Ouch.

We’re wondering how Miley’s feeling now that she knows her new cropped blonde hairdo has effectively doubled her apparent age? Perhaps Flavor Flav needs a massive pair of spectacles? It would certainly explain the size of the timepieces he carried around his neck… To be fair to the guy, he did at least confuse Miley with someone that was actually at the festival; Gwen’s band No Doubt were performing there, ahead of the release of their sixth studio album this week.

Their meeting certainly made for awkward viewing (even if it’s pretty entertaining). Huffington Post have hosted a video that shows Flavor walking away from their photo opportunity, telling his entourage how glad he was to have met Gwen Stefani. A lady then whispers to him that it was in fact Miley Cyrus that he just got up close and personal with. “I know that's not Hannah Montana,” he protests, before going back and checking again and explaining that he’s a fan of Miley’s too. We reckon he just about managed to save face, there.