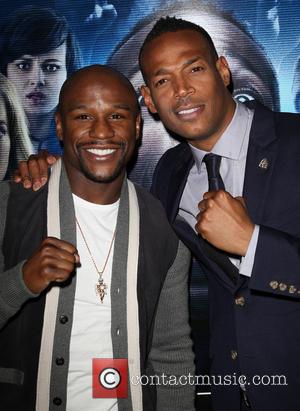 Boxing champ floyd mayweather, Jr. has confirmed he dumped his fiancee after discovering she had aborted his twins without his knowledge.

The sportsman confirmed his split from longtime partner Shantel Jackson in April (14), less than a year after proposing to her with a $10 million (£6.25 million) diamond ring, and now he has gone public with the reason behind the break-up.

He took to his Instagram.com page early on Thursday (01May14) and shared a snap of what appeared to be Jackson's ultrasound on a medical document, which revealed she had been just over six weeks pregnant and was carrying at least two fetuses.

In the accompanying caption, Mayweather, Jr. wrote, "The real reason me and Shantel Christine Jackson @missjackson broke up was because she got a abortion (sic), and I'm totally against killing babies. She killed our twin babies."

The post was later deleted but Mayweather, Jr. stands by his decision, adding she deserves the public shaming for deceiving him.

During an interview with V103 radio station, he admits he only found out from crews of his reality Tv programme on the Showtime channel.

He says, "I reacted off emotions because I was upset, I want(ed) the world to know that she really had a miscarriage.... somebody from showtime had said to me, 'Floyd... she didn't have a miscarriage, she had an abortion'. I feel bad, she was telling me the whole time that stress from me made her have a miscarriage, when all in all, she went and got an abortion. She's selfish..."

He also adds, "I was in love with someone that I didn't know."