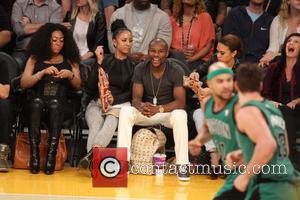 Picture: Floyd Mayweather Jr. - Celebrities courtside at the Lakers game. The Los Angeles Lakers defeated the Boston Celtics by the score of 101-92 at Staples...

Police in Las Vegas are playing down reports suggesting boxer floyd mayweather, Jr. was involved in a hired beating of associates he suspected of stealing jewellery from his home, insisting the incident is nothing more than a rumour at present.

A Las Vegas Metro Police Department spokeswoman has revealed there is no current investigation into the news story underway and no victim has come forward to file a criminal report.

The publicist tells Bleacher Report, "I've been trying to put this rumour to rest all week. We've had a variety of reports that have come out stating this event occurred. We have not had a victim come forward and make a report like what is being alleged (sic). So if this event occurred, it's something where the victim has not come forward to the police to make an official complaint.

"There is no criminal complaint on file so there is no reason to go and contact Mr. Mayweather."

Last week (ends14Mar14), sources told Tmz.com two men had their arms and legs broken in the beat down and both were hospitalised.

The website posted what was reportedly X-rays of the injuries suffered.

Mayweather, Jr. is scheduled to face Marcos Maidana in Las Vegas on 3 May (14).