Review of Skin And Bones Album by Foo Fighters 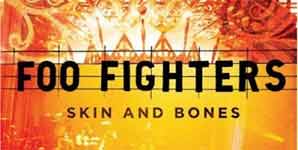 Over the course of the last decade, the Foo Fighters have established themselves as one of the world's premier rock bands. Regular festival headliners, they proved their popularity by staging their own huge outdoor shows in the UK in 2006 and have now brought out their first live CD, recorded at an acoustic show in Los Angeles.

An acoustic release may seem a bit of a surprise given the band's reputation, but if you consider that 2005's "In Your Honour" album had a 'quiet' disc, it makes a lot more sense. Those performed here are given faithful renditions, such as the slow and brooding opener "Razor" and "Friend Of A Friend", while "Over And Out" actually fares better than its studio counterpart. The best of the bunch by some way is "Cold Day In The Sun", which for the first time sees Taylor Hawkins taking lead vocals and, nostalgically, finds Dave Grohl taking up drum duties. Not many would class these tracks as the Foos' best though, so it's very much a case of them appealing to hardcore fans.

Of more interest to casual followers of the band are the new interpretations of the quartet's best known hits. "Walking After You" and "Big Me" translate effortlessly, while "Times Like These" is slowed down to the effect of a new warmth being found. Nirvana fans are rewarded with a rendition of "Marigold" and Grohl can't resist the temptation to rock out, roaring through "Best Of You", but it is the breath-taking "Everlong" that truly stands out and ends the 'show' on an epic high. The band's frontman comments that it's "been fun", which sum up the record suitably - something a bit different, but enjoyable both for performers and audience.