Review of The Pretender Single by Foo Fighters 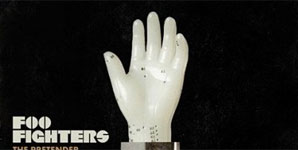 Anyone in doubt of the Foo Fighters' stature in the world of music need only know that, following on from headlining this year's V Festival, their November arena tour sold out in minutes. The dates will be in support of their sixth album, 'Echoes, Silence, Patience & Grace', which is due for release at the end of September.

At first it seems the lukewarm reception for the acoustic half of 2005's 'In Your Honour' has passed unheeded as Dave Grohl sings softly across the gentle guitar line, but on the signal of Taylor Hawkins' drums, the track kicks off in style. Perhaps their most aggressive moment since 'All My Life', crunching guitars drive 'The Pretender' to a dynamic chorus that demands bouncing around and to be shouted by crowds of thousands. The middle eight builds magnificently before letting you relax - before taking off all over again. As far as appetisers for an album go, they don't get much better than this.