The Foo Fighters Had To Abandon A Gig In Canada On Saturday Night (11jul15) After Just 20 Minutes When A Storm Hit The Area. 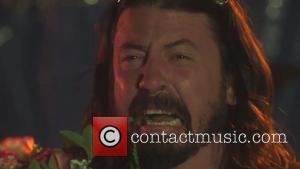 The rockers took to an open-air stage in Quebec City, Quebec during the storm, and managed to play just four songs - Everlong, Monkey Wrench, Learn to Fly and Something from Nothing - before having to scrap the show due to safety concerns, according to NME.com.