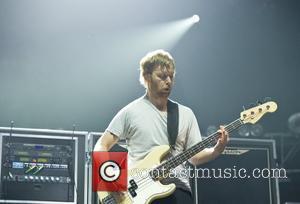 The Foo Fighters gave fans an extra special treat during a pair of U.K. gigs over the weekend (02-03Jul11) by inviting stars including Alice Cooper, Roger Taylor, John Paul Jones and Seasick Steve on stage to perform with them.
The band was playing at the Milton Keynes Bowl in Milton Keynes, England on Saturday (02Jul11) when frontman Dave Grohl surprised the crowd by inviting Queen drummer Roger Taylor, musician Bob Mould and Cooper onto stage.
Taylor was first to emerge as he took over drumming duties from Foo Fighters sticksman Taylor Hawkins, who sang lead vocals on track Cold Day In The Sun.
Grohl then paid tribute to Mould, telling the crowd, "The good thing about this record is that I got to make a song with a person that I can truly call my hero, the person who is responsible for the Foo Fighters," before the star joined the group for a rendition of Dear Rosemary.
But the biggest surprise was saved to the end when shock rocker Cooper appeared on stage and sang his hits School's Out and I'm Eighteen as part of the show's encore.
As the stunned crowd saw Cooper emerge, Grohl shouted, "Say hello to one of our heroes - Mr Alice f**king Cooper!"
During the band's second night at the venue on Sunday (03Jul11), Grohl played drums on the encore with Led Zeppelin star Jones, who is part of the rocker's Them Crooked Vultures sideproject, while veteran blues rocker Seasick Steve took over vocal duties.
The star-studded pair of gigs ended with a spectacular fireworks display.