The Foo Fighters Pulled Out Of A Performance At The Emmy Awards On Sunday Night (20sep15) Because Show Organisers Refused To Let The Band Play Their Chosen Song In Full. 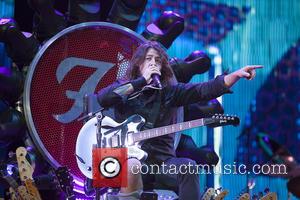 Picture: ç - Foo Fighters performing on their long awaited first UK gig since Dave Grohl broke his leg and was forced to cancel Glastonbury at...

The rockers were nominated for two prizes at the 2015 Primetime Emmy Awards for their documentary series Sonic Highways, but none of the bandmembers turned up for the ceremony Los Angeles.

Frontman Dave Grohl subsequently revealed the group had been on the bill to perform, but Emmy bosses had dropped them at the last minute, saying, "We were supposed to play on the Emmys, and we were gonna play on the Emmys and then they kicked us off..."

The band has now clarified what happened in a statement to Rollingstone.com, which reveals the rockers became embroiled in a row with organisers over the length of their performance.

It reads, "The band and the Academy were extremely happy and excited to have Foo Fighters play as the first ever rock band on the Emmys. Fox then refused to allow the band to play a full song from the Emmy-winning Sonic Highway. That is why the band decided not to perform."