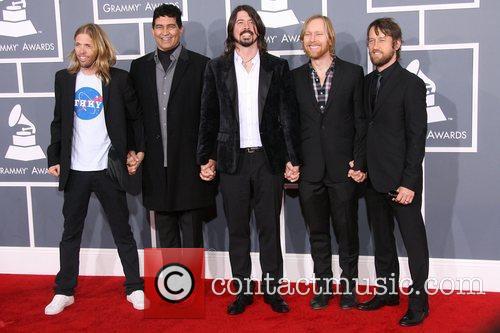 Dave Grohl was spotted enthusiastically clapped along to as fans cheered the stunt. The song has become a popular internet meme in recent years, with people tricking others into watching its music video, creating the term ‘Rickrolling’.

It’s not the first time the band have come out against the Westboro Baptist Church. In September 2011, the band uploaded a video of themselves playing a country style song in front of a group of Westboro protestors which contained lyrics such as “Think I’m in the mood for some hot-man muffins”

The WBC have so far responded to the band’s 'Rickroll' on twitter writing, ‘They can sing at us or #rickroll us but @foofighters will only ever get a BIBLE message from Westboro Baptist Church.’

'Westboro came to deliver a message to @foofightersDave (how's that leg?) and it goes a lil sumptin like dis. Did @foofighters just #rickroll us? Oh well! Guess we'll just hafta parody THAT video, too (like last time).'