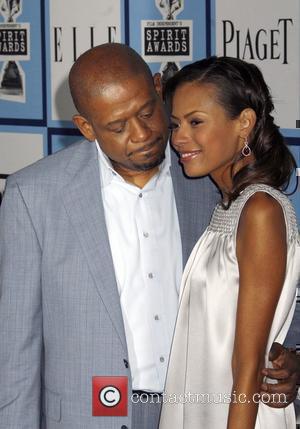 Forest Whitaker and JENNIFER HUDSON picked up acting prizes at the NAACP Image Awards on Friday (02MAR07), just six days after their Oscar wins. Whitaker was named Best Actor for his performance as Ugandan dictator Idi Amin in THE LAST KING OF SCOTLAND, while Hudson garnered Best Supporting Actress for her role as EFFIE WHITE in DREAMGIRLS, at the star-studded ceremony at the Shrine Auditorium in Los Angeles. Accepting his award, Whitaker said, "Doing this role gave me so many blessings. One was being able to go back to Africa and touch my roots." Hudson gushed, "There is nothing like being recognised and honoured by your own." KEKE PALMER picked up the coveted Best Actress gong for Akeelah And The Bee, while Djimon Hounsou was named Best Supporting Actor for BLOOD DIAMOND, after losing out in the same category last weekend (25FEB07) at the Academy Awards. Will Smith's movie THE PURSUIT OF HAPPYNESS won the Best Motion Picture honour and Spike Lee was named Best Director for THE INSIDE MAN. In the TV categories, GREY'S ANATOMY star Isaiah Washington received Best Actor For A Drama Series and his co-star CHANDRA WILSON accepted Best Supporting Actress In A Drama Series. Other winners in TV included Vanessa Williams for Best Supporting Actress In A Comedy for UGLY BETTY - which was named Best Television Comedy Series, TYLER JAMES WILLIAMS for Actor In A Comedy Series in Everybody Hates Chris and TRACEE ELLIS ROSS for Actress In A Comedy Series in GIRLFRIENDS. In music, Prince and MARY J. BLIGE picked up Male Artist and Female Artist respectively, The Roots in the Group category and Gladys Knight for Jazz Artist. Comedian Bill Cosby was inducted into the NAACP Image Awards Hall of Fame and U2 frontman Bono received the Chairman's Award for his tireless campaigner against world poverty and debt. The Image awards are given out annually by America's National Association for the Advancement of Colored People.