British Pop Star Foxes Had To Play One Of Her Songs At Three Times Its Normal Speed In A Desperate Bid To Smash A World Record With Seconds To Spare. 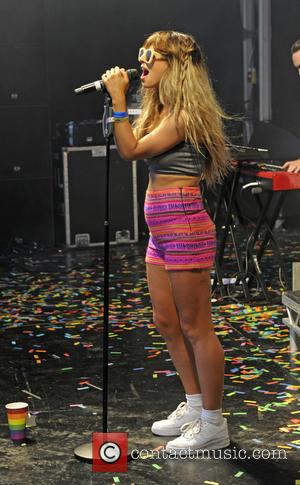 The Let Go for Tonight hitmaker got her name in the record books in May (15) by playing seven concerts in seven different U.K. cities in less than 12 hours.

Now she has revealed the rules for the stunt were so strict that she was forced to speed up a song at the end of the final gig in order to complete the show before the deadline.

The singer, real name Louisa Allen, tells Q magazine, "I broke a Guinness World Record for the most gigs done in one day this year... I managed to do it but it was weird. The rules were strict: I had to play the same set at each show, so at the last gig I had to rush one of my songs. We did it in triple time, but I made it!"

The record-breaking run of gigs was staged to raise money for Trekstock, a charity which helps young cancer sufferers.

Foxes to collaborate with Pharrell

Foxes claims someone ripped their tooth out for her

Foxes is new face for H+M

Foxes: I don't take myself too seriously