'Les Plus Beaux' opens the album with a steady paced almost country type feel with French vocals accompanied by intertwined picked electric guitars underpinned by gentle rumbling percussion and eventually bass guitar and hints of electric piano. The track has quite a sad feel during verses which pushes into a brighter feel during choruses and the instrumental. 'Muddy Heart' follows; a low fi, country bluesy type track with vocals again accompanied by picked guitar. The tracks has quite a stomp to it amongst its' easy going vibe, while the vocals have an almost Doherty-like rough lack of pitch perfectness to them. With the opening two tracks of E Volo Love there's a feel of background music about Fran?ois And The Atlas Mountains' unperfected writing which already has blandness about it. With gentle percussion beneath quite a funky blues groove in the electric guitar and bass parts, however, 'Edge Of Town' has an easy going, feel-good feel to it through its blend contrasting the albums' opening two tracks; a blend that gradually builds up and up through rumbling busy layers of tribal sounding percussion. 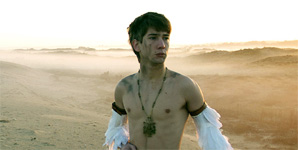 'City Kiss' opens with a much fuller band blend holding a resemblance to country folkers Hal and what Belle and Sebastian might have been if they were French. The track contains both strummed rhythm and picked guitar, bass and drums and is further deepened by suggestions of brass and strings. An unusual saxophone duet then marks the introduction to 'Azron Tune' which is joined by melodic bass, gentle strummed guitar and sensitive percussion. Substantially slower yet fuelled with sensitivity, 'Azron Tune' brings another flavour to E Volo Love. The gently flowing saxophone duet returns later in the track, oozing effortlessly amongst a real smooth, chilled sound. With 'Buried Treasures', however, Fran?ois And The Atlas Mountains step back to a rougher bluesy feel with something of a melancholic early Radiohead edge to it lurking in the harmony. Maintaining a down tempo, slightly sad sounding ballad, 'Cherchant Des Ponts' continues in gentle sensitivity though regrettably sounding like random love song lyrics being mumbled in French over a sensitive musical grounding including string backings. Ongoing throughout the entirety of E Volo Love is an unfortunate tendency towards monotony; through Fran?ois And The Atlas Mountains offer different feels from track to track, there is little variation within the track itself; a lack of distinct verses and choruses for example.

'Slow Love' changes the feel completely once again, opening with an electric piano and bass heavy, eighties pop ballad type feel. The electric piano then continues through the sombre sounding 'Bail Eternal' underpinned by almost a gentle trance kind of feel but still somehow lacking structure or a real depth like its' in anticipation of building to something but it never gets there. To follow, 'Piscine' then snaps to a piano accompanied French folk song style while 'Do You Want To Dance' is a picked guitar accompanied gentle singer songwriter folk ballad. Sensitive and heartfelt, the down-tempo conclusion to this album is probably the only track on the offering to capture a real sense of emotion.