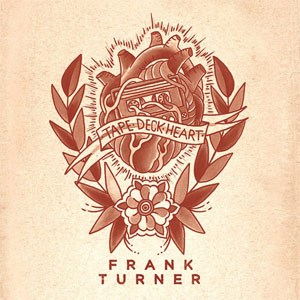 'Tape Deck Heart' tackles substance abuse, love, loss, regret, commitment, aspiration, reality, realisation, change, progress, parenting, Punk and passion amongst many other things as Turner develops, rather than shifts or alters, his sound since 'England Keep My Bones' . 'Recovery', the album's catchy first single proper released in March, heads up the roll call with Frank in fine familiar form just managing to fit in all the words he has to impart before time runs out. As he comes to realise the onset of his own unimagined maturity, an R.E.M. jangle of a guitar on 'Losing Days' sees tattoos multiply through boredom and Turner lament wasting precious time, already questioning the mark he has left and the accomplishments of his life: "And all these small ideas are suddenly commitments, and greatness slips on by."

'The Way I Tend To Be' sees Frank in saccharine, sweet, mawkish memory mode; fit for any Richard Curtis Rom-Com but not his best work (His sentimental ode is pitched somewhere between Ed Sheeran and James Blunt, and that's not a tent I want to be in). Live favourite 'Plain Sailing Weather' is more of a pleasing proposition altogether with a stirring set of lyrics that are both self-flagellating and unflinching in their potency. "I have yearned for you in the airless hubs of international airports, in the hollow hell of many hotels", Frank sings out as he questions amongst others Hollywood's and, somewhat bizarrely, Motley Crue's presentation of life in 'Good And Gone'.

'Tell Tale Signs', the source of the album's title, strips it all back (As does 'Anymore' later) for more relationship analysis before last year's album teaser 'Four Letter Words' ramps up the energy and urgency with what Frank says is his nod to Queen. I can't see, or hear, it myself. It's a corker of a song that incorporates a fabulous vaudevillian honky-tonk piano and machine-gun drumming into a riotous jamboree of anthemic anarchy. It's the standout track of the album and easily, aside from the more commercial 'Recovery', its most immediate; if anything, it's more Carter USM than Queen.

'Polaroid Pictures' laments the passing of the Astoria so trains can 'drag the vanquished to Versailles' whilst 'Fisher King Blues' deals with shattered dreams as Turner goes all out with a his soul seemingly wrapped around each word. Latterly, the somewhat, not entirely unpleasant as they sound, Soft-Rock tones of 'Oh Brother' play out before the reflective narrative of the introspective love song 'Broken Piano' draws the twelve track set to a close.

It's all there; the anthemic choruses, the passionate delivery, and the poetic and sometimes biting lyrics. 'Tape Deck Heart' is a fitting follow up to 'England Keep My Bones'. The mix of tenderness and venom works well and Frank only briefly slips up as dips into Kleenex clumsiness. Frank says, "A 'Tape Deck Heart' is someone who has a love of music above anything else": If you do then you won't be disappointed.