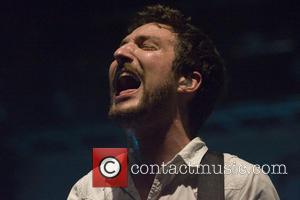 The singer/songwriter was one of the headlining acts at the British music event in England, and drew huge cheers from the crowd when he wheeled himself onto the Main Stage.

The wheelchair entrance was inspired by Cobain, who famously turned up in the device at Nirvana's last ever show at the festival in 1992.

Turner then jumped up and played his track If I Ever Stray.

The performance came a week after Turner scrapped festival appearances in Europe due to a back injury.