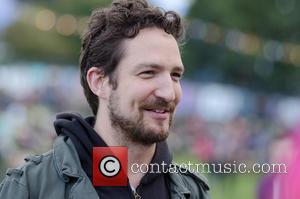 The musician made the revelation while discussing Dave Grohl's onstage injury during a Foo Fighters gig in Sweden on Friday (12Jun15), when the rocker broke his leg in a fall but later returned to the stage to finish the show.

During an interview with Britain's XFM radio station, Turner hails Grohl a hero and admits he suffered his own health scare on tour, saying, "I did three months world touring with two slipped discs, although I have to say it looked like breaking a leg was a little more dramatic. It looked extremely painful. So hats off to Mr. Grohl! When those kind of moments happen on stage adrenaline and the sheer tsunami of embarrassment that comes over you kind of carries you through to the end of the show, and then you go off stage and you cry into your tour manager's arms whilst they pump you full of painkillers!"

The Foo Fighters cancelled a number of shows following Grohl's injury, but they have yet to confirm whether they will go ahead with their upcoming gigs at London's Wembley Stadium and at Britain's Glastonbury Festival.