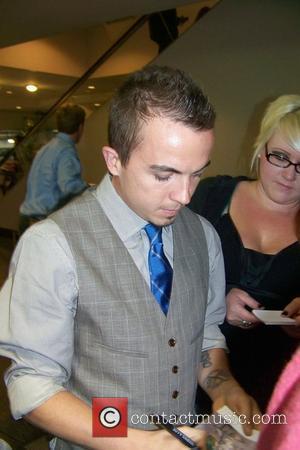 Picture: Frankie Muniz signing autographs for fans on his way to the premiere of 'Star Trek' in Hollywood Los Angeles, California - 30.04.09

Frankie Muniz has denied holding a gun to his head after a heated argument with his girlfriend.
FRANKIE MUNIZ, the American actor and star of 'Malcolm in the Middle', has denied threatening to shoot himself, despite a police report claiming otherwise, reports E! News.Muniz has admitted to having a fight with his girlfriend ELYCIA TURNBOW a few days ago, which resulted in the authorities being called, but has vehemently denied allegations that he placed a gun to his head. A representative for the actor said, "A gun played no part in the argument and was voluntarily given to the police for safekeeping", adding, "He was not suicidal. She was not assaulted. They have been together since the incident; are still together and are moving forward with their lives and with their relationships". However, according to a police report filed last Friday (11th February 2011) in Phoenix, the 25-year-old actor and Turnbow got into a heated argument over "prior relationships" in which she claimed that Muniz "grabbed a gun and held it to his head", possible with the "intent of committing suicide". Turnbow then claimed that she called one of Muniz's band-mates, who took the actor to a nearby hospital where he was evaluated and then released.
According to his girlfriend's police report, Muniz then returned home and things turned violent. She alleges that her boyfriend "punched her in the back of the head, and threw her into a wall while in the downstairs bedroom". The report goes on to say that "The officer responding to the disorderly conduct call found a black semi-automatic .380 handgun in a downstairs closet".