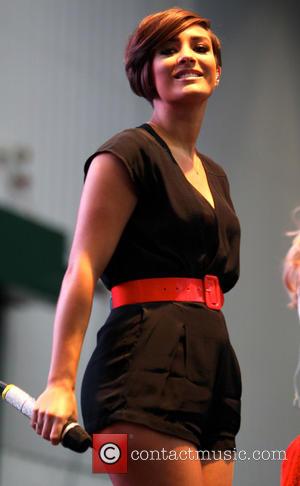 Frankie Sandford has become the third member of The Saturdays to get engaged, leaving just Mollie King and Vanessa White without rings on their fingers. Her girl group buddies Una Healy and Rochelle Humes both married last year. Now it’s Frankie’s turn to walk up the aisle and she’ll be doing so with her footballer beau Wayne Bridge, the Bright on & Hove Albion player.

Frankie broke the news on Twitter, as all good celebrities do these days. There’s nothing like sharing your love for your man with a 140 character message and an Instagram snap, after all. Accompanied by a picture of Wayne kissing her cheek and Frankie holding her newly-bejewelled hand up to her lips in mock surprise, Frankie simply said “Guess what?!!!!” Well, it wasn’t hard to guess, of course, so the messages of congratulations came flooding in. Amongst the first to publicly congratulate her were her band mates. Una Healy tweeted “So Happy for @FrankieTheSats and Wayne who have recently got engaged X.” The official Saturdays Twitter account was quick with the love, too, posting “LOTS AND LOTS of love and best wishes to our @FrankieTheSats and Wayne!! Wishing you a lifetime of happiness together! xoxo"

Thank you for all your lovely messages! Very happy lady! X

It’s been a good year for good news in the Saturdays camp, too, as the band celebrated their first number one last month, with the song ‘What About Us,’ featuring Sean Paul. Frankie Sandford of The Saturdays - now an engaged woman