Oh Frankie: Is Wayne Bridge Responsible For The Worst Proposal Ever?

Wayne Bridge used the old dogs in tuxedo trick to persuade Frankie Sandford to marry him. 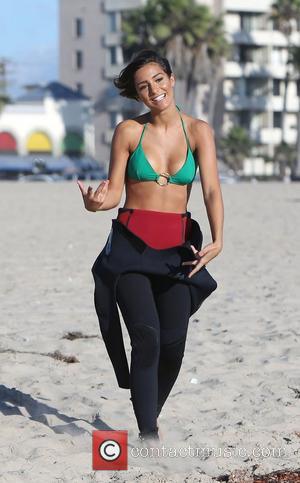 Frankie Sandford has finally revealed the details of Wayne Bridge's apparently romantic proposal last week, and it ain't pretty. Well, it probably comes across as quite cute to the bulk of you, but really, it's horrendous. Hell, it involves dogs in bride and groom's outfits.

She told Lisa Snowden and Dave Berry on Capital's Breakfast Show, "Wayne took me to a hotel and he got my dogs involved. I didn't know my dogs were there and they came in in little bride and groom outfits. And Pixie had the ring around her neck on a ribbon." To be fair to Sanford, she admitted that the proposal might sound a little strange to anyone who isn't obsessed with dogs. "I think for people who aren't dog fans it's a bit of a weird proposal so I feel like I only want to tell people who like dogs," she added.

Just weeks before the proposal, the Saturdays singer had assured the press that Wayne had no plans to propose and even began to have doubts about her relationship when he began acting strange. "He'd been acting so weird that when he left to come back in and do the whole proposal thing in my head I was thinking, 'Oh no we've become one of those couples that can't make conversation at dinner.I was panicking! But it was because he was pooing himself all night. And then my family came in and surprised us."