The Saturdays stocked up on tea before jetting off to America because they were so worried they would miss the hot British drink while they were away. 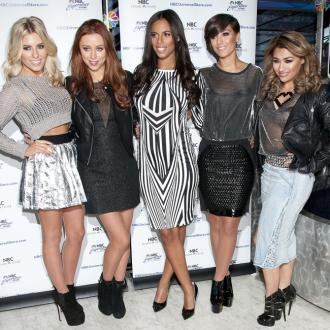 The Saturdays stocked up on tea before jetting off to America.

The 'What About Us' hitmakers set up home in Los Angeles last year to film their reality show 'Chasing The Saturdays' and the girls were more concerned with having withdrawals symptoms from their favourite British tea brand than they were about running out of clothes or shoes.

Asked what she packed in her suitcase, Frankie Sandford quipped: ''Tea! I ended up taking 250

PG Tips teabags with me. Not very rock'n'roll, is it?''

The girl group - also made up of Rochelle Humes, Vanessa White, Mollie King and Una Healy - are all in agreement the highlight of their trip was landing a coveted invite to the MTV VMAs, where they felt they finally had their place in the US alongside fellow British exports The Wanted and One Direction.

Frankie revealed to Britain's Star magazine: ''The first thing we all spoke about when we talked about doing the show was how much we wanted to go to the VMAs. When we first got there, we got invited to go and we were all like: 'Oh, my God, I can't believe we're here.''

''The Wanted were there and One Direction - it's really exciting to see them doing so well in America.''

The singers were so starstruck when they met superstar Jennifer Lopez at the event, none of them could pluck up the courage to say hi.

Frankie added: ''We saw J.Lo coming out of a lift at the Golden Globes. We all went so quiet, and that never happens with us, you know! So funny.''