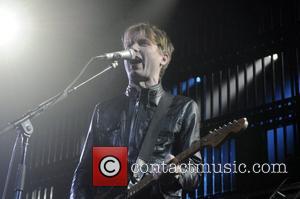 Scottish indie rock act Franz Ferdinand have been confirmed as the final addition to the lineup for the Shockwaves NME awards Big Gig.

The Glaswegian fourpiece will join White Lies and Crystal Castles in supporting The Cure, who headline the February show at London's O2 Arena having been named as the next recipients of the Godlike Geniuses prize at the NME awards.

"We've always fancied playing the millennium dome and it's great to share the stage with the Cure - one of the greatest British bands of the last 30 years," said Franz Ferdinand lead singer Alex Kapranos.

And after previewing material from their new album Tonight: Franz Ferdinand at the Heaven show, the Take Me Out stars will hit the stage at the O2 Arena next month to conclude the Shockwaves NME awards tour.

"Their set will also provide some light between bouts of dyed-black dark majesty from the Cure, Crystal Castles and White Lies," said NME reviews editor Hamish McBain. "It's one hell of a lineup."

Tickets for the Shockwaves NME awards Big Gig are priced at £30 and are on sale now.