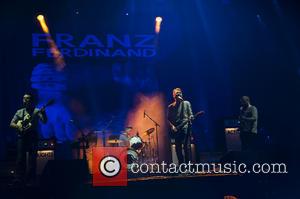 The Take Me Out hitmakers have been working with Ron and Russell Mael since meeting up in California last year (13).

Sparks keyboard player Ron Mael tells NME.com that the collaboration isn't as odd as it may seem, explaining, "You can really hear a mashing together of both bands. If there was a train crash between Franz Ferdinand and Sparks, this is what the wreckage would sound like.

"Alex (Kapranos) and Russell's voices are very distinctive, so you notice the trade-off between them straight away. Both bands' styles are coming together pretty seamlessly."

Mael admits the get together has been in the planning stages for years after Kapranos expressed an interest in working with the brothers in a 2007 radio interview about Sparks.

He says, "We liked what each other does, and it became the usual thing bands say to each other of, 'We should do something together'. We kept in touch over the years, and last April we both happened to be playing in San Francisco. We struck up the same conversation, but this time we actually started working on it. It seems to be turning into something strong."